By now, just about everyone in the free world has read, seen, or heard of the motorcyclist rescued from underneath a burning car by a crowd of bystanders. Here’s the scoop from the local paper there in Logan, Utah. They have 14 minutes of the video of the rescue – pretty compelling stuff, if you ask me: http://news.hjnews.com/news/article_4f16762a-dd6c-11e0-a78a-001cc4c002e0.html Here’s another link to some really great coverage of the story as well: http://today.msnbc.msn.com/id/44499884/ns/today-good_news/t/rescuer-i-thought-man-beneath-burning-car-was-dead/

Many of the rescuers were students there at Utah State University. One of them is a friend of mine, Abbass, a PhD student from Lebanon. http://www.cbc.ca/news/world/story/2011/09/14/utah-motorcycle-rescue-heroes.html He’s the guy in the red shirt at the press conference – we were in the same cohort for our PhD. 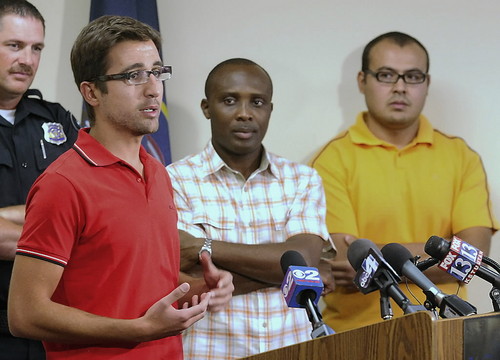 Perhaps you remember that Utah State University is my alma matter. 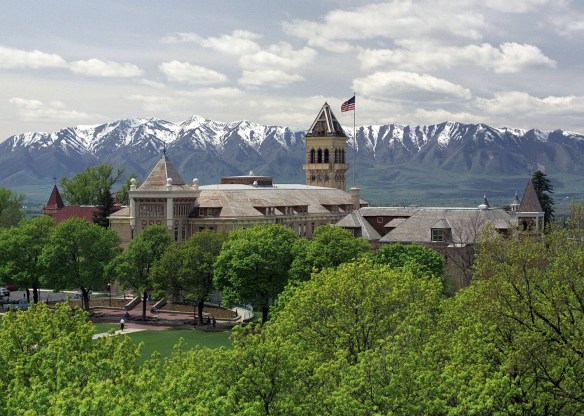 Yes, I earned my BS in Psychology (while a single mother), my MS in Instructional Technology (while a single mother), and my PhD in Instructional Technology and Learning Sciences from USU (while married with two boys and then had your sister along the way).  Why all three from the same school? The first was by accident – my ex took me to Utah State and then left me there when we divorced. My MS and PhD were an easy choice. The Department of Instructional Technology and Learning Sciences is one of the very best in the nation and anywhere else would have been a lateral move or a step down in reputation. However, that is not the primary reason I felt compelled to stay at Utah State for all of my degrees.

It was because of the people.

I know the whole world is going crazy for these bonafide heroes that rescued Brandon and what they did is truly heroic but….that’s just how we roll in Cache Valley. While many of us who claim Logan as our home are openly pleased to have such favorable coverage of our much-loved town, we are also a bit perplexed over the extent of the coverage. When the news first broke and I heard “Logan” but no other information about the state or location, I thought, “I bet it is Logan, Utah.” If I were a gambling woman, I would have bet the house and the kids’ education funds on that one.

I particularly love that the rescuers included a woman, foreigners, a stats professor, a scout master, construction workers, and several others. Even though they thought the motorcyclist was dead and were simply recovering a body, they lifted a burning car because they could not stand idly by and watch him burn. It was they who decided what to do and took action before the police could even figure out what was going on.  I LOVE that it was the woman who was courageous enough to lay down on her stomach and face the blaze head on – she was the one who discovered Brandon was still alive and very much in need of their help.

I am so proud to be an Aggie and so proud of my friend, Abbass.  I would like to think there is enough goodness in the world that it would happen in any town, but to have it happen at Utah State? That’s just pretty darn cool.

So, if you ever get bored of the school you are currently attending and looking for one that truly embodies a spirit of unity and caring, regardless of race, color, creed, or religion, check out Utah State. Their academics are pretty stellar and you will be hard pressed to find a lovelier college campus in the U.S. USU draws students from all over the globe (as seen in the presser). Oh, and the basketball team is all kinds of awesome and we have the coolest school song evah*!!!!  Oh yeeeeaah, and the ice cream – they have a creamery there on campus that puts out the most fantastic ice cream on the planet. Plus, the school is close enough to Idaho and Wyoming that it is not entirely peopled by Mormons which is nice if you want to learn how to function in the world outside the borders of Utah.

Truly, I can’t say enough good about Utah State.  Now I have even more to crow about. I am thrilled that so much international attention is being paid to this quiet, but amazing, university and town full of ordinary people who are willing to run towards a fire to help out a fellow human being.

P.S. Edited 09/16 to add that it was a fellow ITLS student who captured the footage of the wreck: http://www.itls.usu.edu/htm/news/articleID=14035 Told you it was an awesome department.

*Words to “The Scotsman”

7 thoughts on “Show Me a Scotsman”